FREE UK SHIPPING ON ORDERS OVER £150

Pay in Instalments with Klarna at checkout

I hope you are all well.

A few weeks over due, sorry!  The 2nd in our series of the RF Travel Club, North Antrim Coast and Donegal Ireland.

As many of you know I am born and bred in Ireland. I was raised in the North of Ireland in a small market town in Co Tyrone. A County in the middle of Northern Ireland on the shores of Lough Neagh. A lot of farm land and a lot of green fields. Summers were spent on the North Antrim coast. It was wild, rugged and raw. Every day we would swim in the sea off the rocks and if we weren't in the sea we were crabbing or fishing. I am not going to lie, I truly did not appreciate just how beautiful my country was/is and for this reason it had to feature in The RF Travel Club.

Allow me and my friend Jasper who co hosted the live last week to take you on a tour.

First and foremost, you will need a car. Our transport system, is not bad but it is limited. If travelling from the UK you can sail from Liverpool to Belfast or Cairnryan/Stranraer to Larne.

We both decided that a trip to Belfast is absolutely essential. This historic city is home to Harland and Wolf who build the Titanic at one stage were one of the biggest ship builders in Europe if not the world. Visit the newly built Titanic quarter and take a tour of how the Titanic exhibition - it is so fascinating.

Have a walk around the city. The artictecture is so beautiful and mixture of Georgian and Victorian. We were never a nation known for our cuisine but new eclectic restaurants are popping up all over the place. Do not leave without visiting a few of the traditional pubs and enjoy the best Guinness you've ever had in the Crown Bar. If your’re staying the night try The Merchant Hotel  (£££) in the Catherdral Quarter. This area is buzzing. For those wishing to spend a less on accommodation there are many options. B&B’s and ofcourse Air BnB.

From Belfast make your way to Larne where the coastal route begins - allow yourself a few hours as the roads are narrow and windy and there will be many phoot opportunities. This will take you along the foot of the Glens of Antrim and up past Tor Head and along the coast to the Giants Causeway. For those brave enough to take a walk the Carrick a Rede rope bridge. For those less brave, stop for a coffee in Ballintoy Harbour - a must for fans of Game of Thrones.

Stop at the viewing point over the magnificent White Park Bay with the tiny hamlet of Portbradden in the distance.

The Giant's Causeway is an area of about 40,000 interlocking basalt columns the result of an ancient volcanic fissure eruption. It is located in County Antrim on the north coast of Northern Ireland, about three miles (5 km) northeast of the town of Bushmills. 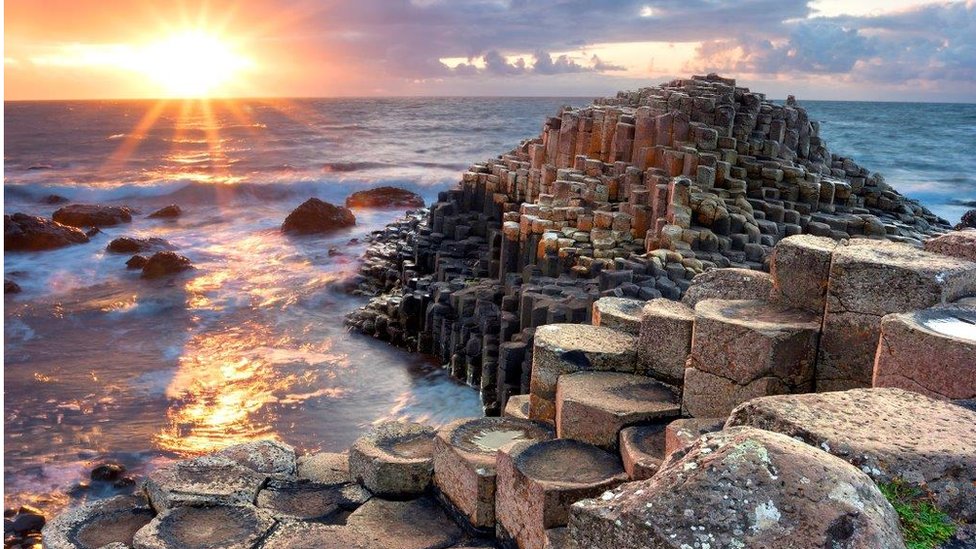 It was declared a  World Heritage site by UNESCO in 1986 and a national nature reserve in 1987. In a 2005 poll of Radio Times readers, the Giant's Causeway was named the fourth greatest natural wonders in the United Kingdom The tops of the columns form stepping stones that lead from the cliff foot and disappear under the sea. Most of the columns are hexagonal although there are also some with four, five, seven or eight sides. The tallest are about 12 metres (39 ft) high, and the solidified lava in the cliffs is 28 metres (92 ft) thick in places.

Next stop is Bushmills, the home of the Bushmills Whiskey Distillery, back open I believe after covid and one of my favourite towns. Jasper runs the most wonderful guest house https://www.theoldbushmillsbarn.com and his father a B&B http://www.portcamanhouse.co.uk in the town. Go to The Bushmills Inn https://www.bushmillsinn.com and sample their Guiness or try the whiskey. Food also very good.

Go own the coastal walk which is truly breathtaking. Rarely do I feel so close to nature than on these walks. Truly spectacular

Pay a visit to the neighbouring village of Portballintrae and meander your way along the spectactular scenic drive past Royal Portrush Links Course.
Don’t forget to stop at the `Harbour Bar in Portush.
Leave Portrush and head toward Portstewart making your way to the historic Musenden Temple  located on the top of headland at Downhill.
Next make your way to Magiligan Point and catch possibly the shortest ferry in Ireland over to Donegal.
Donegal is one of my favourite places on earth. You truly feel like you are in real Ireland. Pick up the North Atlantic drive and enjoy miles of deserted golden beaches, Stop in Maloin Head, the northern most point of Ireland.
Make your way to Downings, Dunfanaghy and see, if you might be lucky, to spot the charming sight of nuns paddling in their habits at the Friary (Ards National Forest Park) Beach.
I could go on and on but I want to leave it up to you to go exploring.
I have really only touched the sides. Please reach out if you have any questions.
Lots of love
Rae xxx